This is the first installment of the "Tracking our impact:" series, based on the results of three years of consecutive surveys among participants of Rural Alternative Schools (ERAs by its acronym in Spanish). Today, we analyze how collaborative work in productive projects developed inside the ERAs, with their characteristic learning-by-doing methodology, proves to be an effective way of building trust among reincorporated community members, campesinos (rural peasants), and public and private institutions.

Recognizing each other in collaboration

One of the outstanding aspects of the survey results is the increment observed in trust levels among actors involved in the ERAs, being much stronger among those who share more time together during daily work: campesino communities, people in the process of reincorporation and PASO Colombia staff. Trust towards government institutions and private companies involved in these collaborative platforms also shows positive growth. 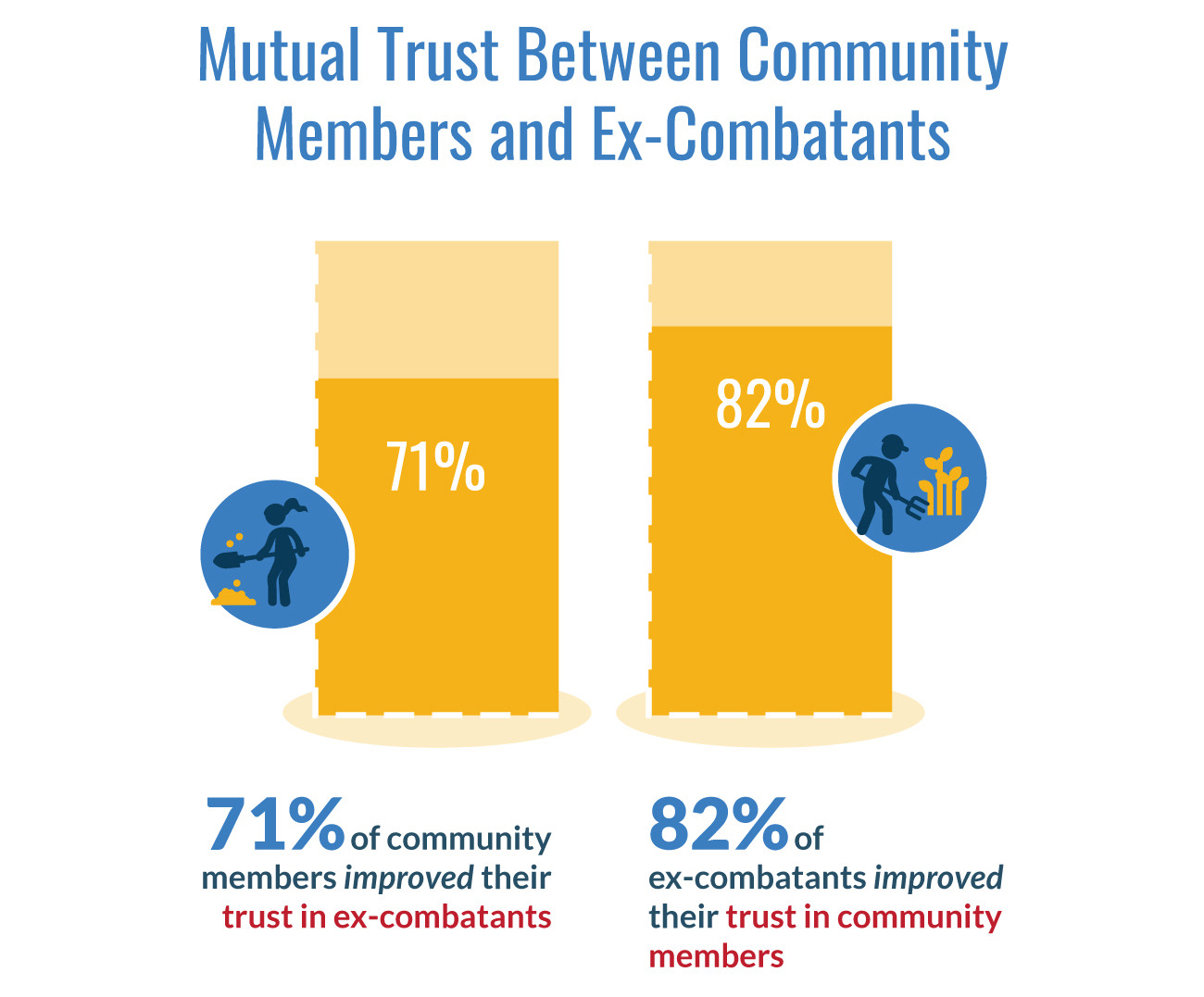 These figures show that the ERA proposal, as a mean to build trust and social fabric through collaborative work in productive activities has so far yielded positive results. This has been achieved thanks to a model that has evolved for territorial work as an alternative to two of the rationales with which rural communities, affected by armed conflicts and illegal economies, have traditionally been intervened:

These two rationales that govern daily interaction in the ERAs strengthen the self-confidence of those involved, as well as trust among those who collaborate in building collective solutions. This trust, which is fostered by a collaboration atmosphere, is also reflected in the fact that there is a clear decision among participants to resolve conflicts through dialogue and mutual agreements. When conflicts or problems arise within the cooperative, 93% of them are solved through dialogue and agreements among participants.

PASO Colombia's role in the ERAs focuses on permanent accompaniment, aimed at catalyzing processes that guarantee adequate integration between economic capital, access to markets, labor, land and any knowledge necessary for the success of the specific productive projects it accompanies. Thus, the learning-by-doing methodology helps participants overcome the fear of making mistakes, assuming shared risks and to quickly learn from mistakes with support from appropriate professionals. This dynamic, which encourages individual self-confidence and mobilizes trust among peers, paves the way for taking on new challenges and creating alliances with other actors.

As highlighted in the University of Notre Dame's report on PASO Colombia's work at implementing the Contingency Plan to Support Ex-coca Grower Families, the extensionists act as the embodiment of PASO's approach inside those territories. Their role is key since they provide direct and constant accompaniment, in which, besides listening to their problems, they also collect the participants’ proposals and dreams.

At its core, all PASO staff and extensionistas respect the dignity and fellow humanity of all those they serve. By acknowledging the inherent worth of each person and their contributions, PASO builds trust. Furthermore, it builds agency among program participants as they see PASO support their ideas, thereby fostering true collaboration toward better solutions.

The work plans accompanied by the extensionist are collectively agreed upon and any technical assistance and pedagogical contents are planned according to the specific needs of each productive project, adapted to each territory’s conditions. Hence, bonds of trust are built with the community based on sharing time together solving common problems.

In this regard, survey results also indicate that in ERAs where extensionists rated the technical assistance better, there are higher trust levels among community members and towards PASO Colombia. In the general aggregate, 76% of participants indicated that the technical assistance provided by the extensionists in ERA projects is good or excellent, and 97% consider that these projects have been very important for their lives. 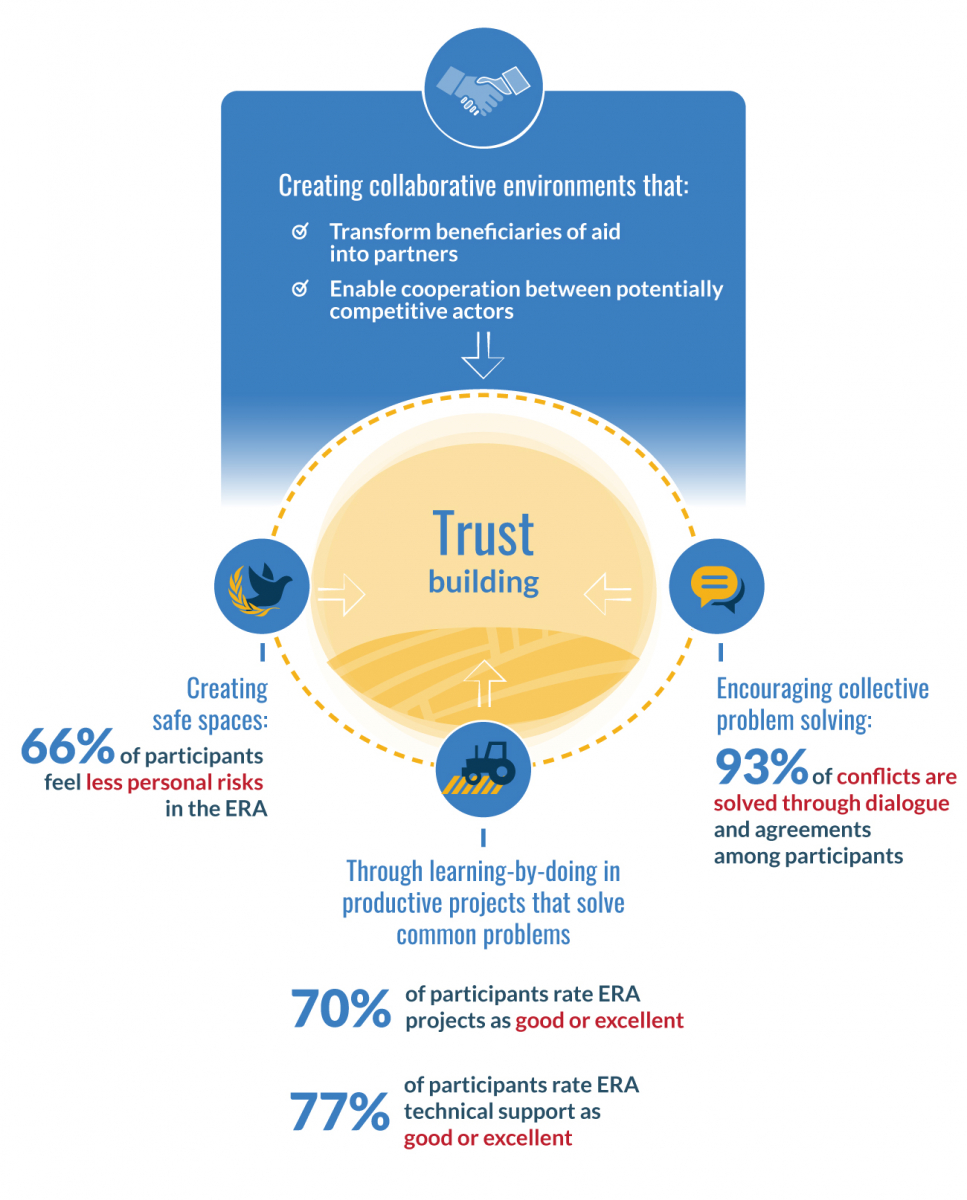 Together we feel safer

Supportive interactions, the consolidation of productive projects through daily work, the adaptation of infrastructure, dialogue as a tool for problem solving, and the co-creation of plans for territorial development make ERAs a space with better security perceptions for their participants. In the medium term, they build projects and connections that offer guarantees to improve their quality of life. In doing so, a space is created where neither life nor the environment are hostile and risk perceptions are transformed: 66% of those surveyed stated that they feel less of a personal risk inside the ERA. This is an important change in perception, considering that in the different territories where ERAs are present, levels of violence and insecurity persist or have increased.

Spending time together is transformative: ERAs are built as paradigm-shifting spaces for information and interpersonal relationships. In them, participants establish key relationships to achieve integration around territorial peace with the international community, private institutions, government entities and other communities in the region. And this relationship serves as a meeting point for the creation of new projects or the mobilization of those that were stagnant. For this, a series of interconnected actions are deployed, starting from the most personal elements, such as trust among neighbors or self-perceptions of risk, and getting to the consolidation of productive projects whose economic impact reaches different associations, cooperatives or regions.

These results also fill the PASO Colombia team with confidence to continue walking along the path already opened with the communities that have participated in co-creating the Alternative Rural Schools, as collaborative platforms for the construction of sustainable peace in Colombia’s rural territories.

Paso Colombia is a program of
the One Earth Future Foundation